A little story from Argentina (on electoral tactics and love)

On Oct 25th 2015, election day in Argentina, the official party candidate Daniel Scioli, a center-left politician from the Peronist party, was not able to reach 45% of the votes nor the 40% and 10 point difference required to be proclaimed president. So, a second round, or runoff, was set for November 22. Whereas the first round featured candidates from many parties, including Left wing parties, the runoff involved the two candidates that got the most votes: Scioli and Mauricio Macri. Macri, a businessman who had been Head of the Government of the Autonomous City of Buenos Aires since 2007, ran for president as the leader of a coalition called “Cambiemos” (Let’s Change). Whereas Scioli’s platform involved a continuation, and revision, of the program implemented by Néstor and Cristina Kirchner in the previous terms (2003-2015), Macri promised a drastic change, as the name of his coalition, Cambiemos.

The first round results came as a shock to many. It wasn’t so much that Macri had accumulated a strong support as the fact that leftist voters saw Scioli as a conservative candidate and declared that Scioli and Macri were the same. Those voters announced they would never vote for Scioli.

Macri’s party used yellow and lots of balloons to communicate a positive, “feel good” sentiment. This cartoon illustrates how Macri’s policies would actually be detrimental to the interests and well-being of his voters, particularly of those most vulnerable.

Facing the strong possibility that Macri won the runoff (he actually did become president despite his record of policies benefitting the upper-middle class and despite the social welfare work of the ruling party to which Scioli had been associated), a movement of grassroots, spontaneous militancy emerged.

On Facebook pages and Tweets, activists shared their tactics such as trying to convince neighbors to vote for Scioli or to acknowledge that Macri would mean the return of the neoliberal policies of the 1990s that had brought the country to the devastating 2001 socioeconomic crisis. On Facebook groups such as Resistiendo con Aguante, a group that formed to “resist neoliberalism,” concerned citizens shared anecdotes about speaking with service providers, cab drivers (usually center-right folks), hairdressers, or fellow citizens waiting for the light to cross the street to bring them to vote for Scioli.

Other people organized and encouraged drivers to help the elderly get to the voting sites. A friend of mine volunteered to drive my eighty-nine year old mother (I live abroad and was not registered to cast an absentee ballot).

One of the most interesting movidas coordinated through social media was “Amor Sí, Macri No” (Yes to Love, No to Macri) organized by LGBTQ activists. These activists called for a massive gathering in Parque Centenario, a park located in the exact center of the city of Buenos Aires, the weekend after the first round of elections. With only three weeks left to the runoff there was a lot to do to try to overturn what seemed like a done deal out of third party support of the neoliberal candidate and the Left’s campaign for a blank ballot.

What is interesting is that, even when these activists, like the Left, were not able to declare a passion for the official party candidate, who many saw as a businessman like Macri, the voting militants were convinced that Scioli was not the same as Macri and that the goal was to defeat Macri by any means possible.

With little time left, it was important to disseminate and steer voters to, first, vote; and, second, to vote for the right candidate. For the “Amor Sí, Macri No” activists it was also important to collectively fight disappointment and hopelessness and think about ways of defending the rights, such as same-sex marriage and sexual identity, that had been conquered in the previous decade thanks to Scioli’s party, the Frente Para La Victoria. 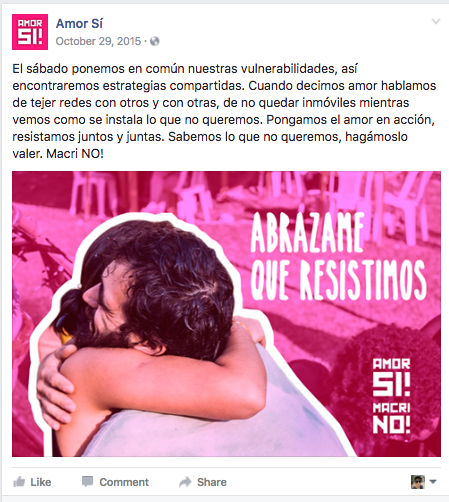 The November 1st event was structured into “three moments”: mini-assemblies of 10-20 people to discuss action-oriented ideas about how to approach undecided voters; Manifesto reading sessions; and singing and dancing under the moto “cumbia is ours, joy too”.

One of the proposals to prompt voters’ awareness and maybe influence a change of heart was to intervene ATM machines sticking a sign that reminded customers of the 2001 bank freeze when the government severely limited cash withdrawals. Macri’s program of opening investment markets to speculation, a practice that the Kirchners’ administration had strongly curved, was the target of this action. 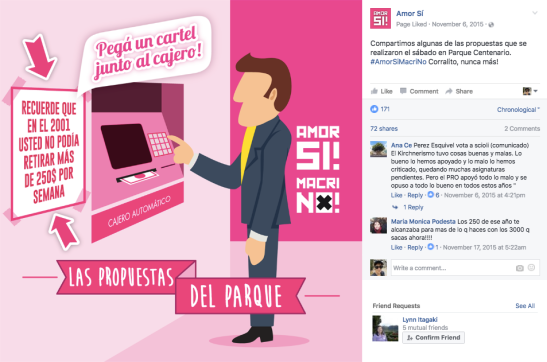 As a way to close the event, “Amor Sí, Macri No” activists danced Zorba the Greek, in solidarity with the Greek people who were suffering the effects of predatory capitalism and were at the time negotiating their sovereign debt with Germany. The dance, a mix of joyful coming together and recognition of the Argentines’ history of dealing with financial crises, was a warning sign of the times to come.

Even though this bottom-up form of politics did not bear the results the activists hoped to get, this is an example of fighting against the odds using creativity, collectivity, and networking as the path to better, fairer democracies. The voting activism of this movement shows a clear awareness of tactics assessing room for maneuver in order to avoid the least desired result.

Before my next post on more tactics used in the 2015 elections in Argentina, change the names in the story and get to work. Love from South America.

This entry was posted on October 6, 2016 by marshagall in Activism.