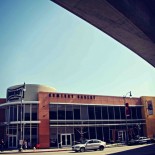 I spent all day yesterday singing this song from the March 8th mobilization in Buenos Aires. #8M #NosParamos #IWS

As soon as the video showed up on my Facebook wall, I recognized the song: “El Negro José”! I found myself whistling the catchy tune, imagining my body in the midst of a crowd, moving as if I was part of a murga, a street parade dance usually performed during carnival and associated with resistance to those in power.

The original song, “Candombe para José”, was written by Argentine composer Roberto Ternán after he saw a man in his twenties dancing and playing the bongo drum in a fishermen club in Uruguay.

In a God-forsaken town, I don’t know why
His black dance makes him move
People in the town call him Negro José
My friend Negro José.

With much love Negro José dances candombe
The color of night is on his skin
He is very happy dancing candombe, lucky him
My friend Negro José.

The lyrics convey the composer’s fascination with a dark-skinned man who despite his many struggles dances seemingly free of sorrow. The speaker, the “I’ of the song, apologizes for calling him “Negro José” but expresses that José’s future is aligned with his, evoking solidarity and shared struggles. This is particularly relevant because the song was written at a revolutionary time, the seventies, and because of the composer’s identity as a man born in the northwest of Argentina, the province of Salta, an area with indigenous and creole majority population, whose people are diminished as “negros”.

The song has traveled the Americas because of its catchy, empowering tune. I read that this candombe, a music form performed by slaves, was sung in Chile by political prisoners  during Pinochet’s dictatorship to celebrate those who were granted freedom as well as mourn their absence by those who stayed behind.

And this is precisely why the song, an atypically harmonious and long tune for a demonstration that usually features adaptations of soccer fans’ chants, was so brilliantly used in the #8M women’s demonstration in Buenos Aires that drew 700.000 protesters. In the video created by NiUnaMenos  you can see women dancing, celebrating, and being moved, emotionally and physically, by collective power in the face of adversity. And there is another impressive video by the team from Universidad Nacional de General Sarmiento that captured that deep mix of emotions from a woman that witnessed the march go by from her balcony.

Through the song, the singers (a collective of musicians called FemiMúsicas en Resistencia) connected histories of oppression, making their protest intersectional and thus accounting for sexism and racism as linked tactics of oppression and exploitation.

Argentina, a nation founded on principles of white supremacy and settler colonialism, privileging European migrants and particularly those of Anglo-Saxon origin over native inhabitants or Southern European migrants, is now more than ever grappling with this history. Working class and combative middle-class sectors reject the president’s framing of the nation as made by people who are “all descendants from Europe.”

In a context of sustained mobilization against structural adjustment policies this rampant white washing of the country’s diversity particularly targets political dissidents and the working class, and through a powerful movement such as NiUnaMenos against gender violence this adapted song shows an intersectional, popular feminism that celebrates the struggles and self-determination of those at the margins of a misogynist, racist nation.

This entry was posted on March 12, 2018 by marshagall in Uncategorized.